Town & Country Real Estate provides this guide to estimate closing costs for you, for informational purposes only. Both Buyers and Sellers should receive Estimated Closing Costs from their respective attorneys prior to closing. Purchasers using a lending institution receive a Truth in Lending Statement from the lender. These are itemized lists of expenses which includes closing costs. Request them as early as possible so that you can best prepare for closing. One of the buyer’s greatest expense is the Peconic Transfer Tax. In November 1998, voters overwhelmingly approved the Peconic Bay Region Community Preservation Fund or CPF. Later, in 2012, East End residents voted in all 5 towns, by a 2:1 vote, to extend the tax for an additional 10 years, thus extending the expiration date to 2022, with an additional extension to 2030.

Since its inception in 1999, the Peconic Bay Region Community Preservation Fund has generated over $1 Billion. These funds have enabled the 5 East End Towns to preserve open space, farmland, beaches, pine barrens, water recharge areas, wetlands, and even an island. In fact, some 10,000 acres through more than 600 acquisitions have been secured. An accomplishment we can all be proud of. The money collected is managed by the respective towns. In East Hampton and Southampton, the towns have borrowed against future fund revenue. While everyone agrees the objective of preserving the rural beauty and protect our natural resources should remain top priority, some have questioned the fairness of existing property owners voting on taxes they don’t pay – a sensitive issue. Furthermore, the levels at which the Peconic Tax begins, have come under scrutiny. Back in 1998 you could possibly buy a starter home at $250,000 and a vacant lot at $100,000 on the South Fork and $150,000 and $75,000 respectively on the North Fork and Riverhead, but our values have come along way over the past 20 years. Yet this entry level has never been adjusted to reflect where markets have appreciated to.

2014 remains the year that the 5 East End Towns collected the greatest sum — $107.69M, eclipsing the previous high water mark set back in 2007 when $96.02M was received. Both were banner years for high end real estate sales according to Town & Country Home Sales Reports. Thank you
to all the buyers who have footed the bill. The 5 East End Towns have preserved sensitive land and increased park lands for public enjoyment for generations to come. To view Home Sales Reports visit TownAndCountryHamptons.com/Market-Reports.

On July 7, 2017, an exception was imposed for first time home buyers purchasing their primary residence. Eligible individuals must apply with Suffolk County. Your attorney can assist with this. It is important to mention that there are some who confuse Peconic Land Trust with Peconic Bay Region Transfer Tax, referred to as Peconic Land Tax or CPF (Community Preservation Fund,) but they are vastly different. The Peconic Land Trust is 501 (c) (3) non profit organization established in 1983 by John v.H.Halsey and a group of East End residents with a focus on protecting Long Island’s heritage of farming. The trust does not share in the taxes collected. For more information visit PeconicLandTrust.org. 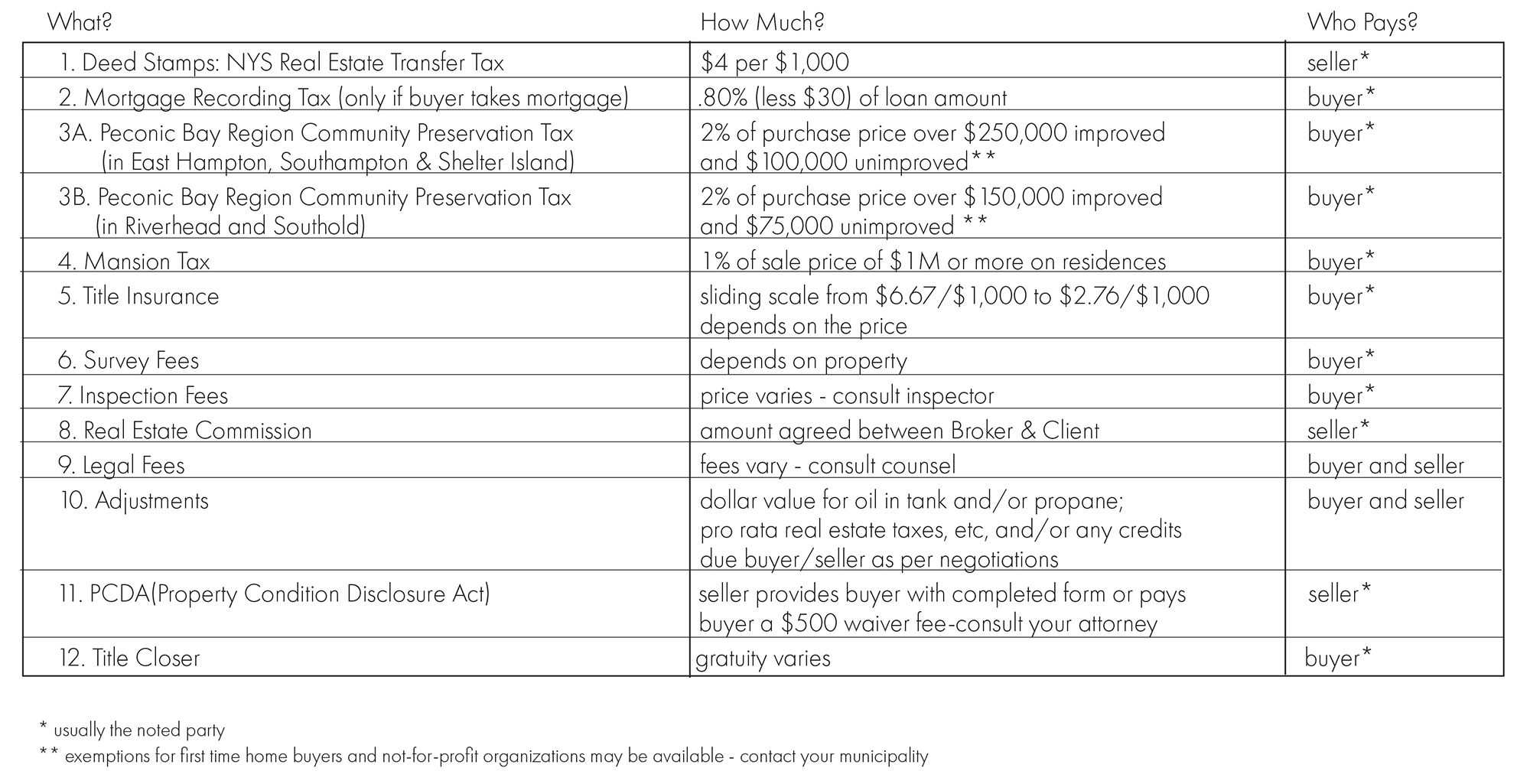