If you follow our T&C Blog, you have been reading about increases in sales contract, home sales, building permits, and decrease in inventories… all of which result in home prices going up!
Home sales in October 2012 rose 6.3% from October 2011… that’s the greatest year to year gain since July 2006.. a key measure and important future indicator.
The study as posted by Core Logic went on to indicate the month to month decreased (September to October) but that is a function of seasonality.. nearly every October numbers are lower than September sales figures
100 metro areas are studied and 83 saw increases.. in Arizona prices rose a staggering 21.3% year over year.
The National Association of Realtors stated the number of homes available are at a 10 year low!
Additionally, the number of contracts signed in October were also at a 6 year high.
Supply & demand in that fashion dictates price increases.
So, are you in? 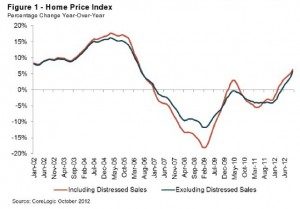